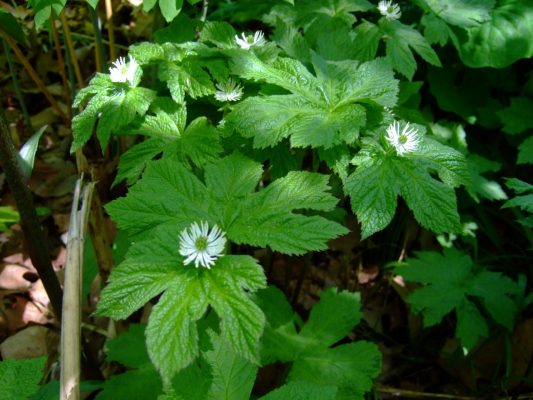 The medicinal herb Goldenseal as an alternative herbal remedy – Goldenseal is a plant that grows wild in parts of the United States but has become endangered by over harvesting. With

What Goldenseal Is Used For

Goldenseal’s numerous uses are attributed to its antibiotic, anti-inflammatory and astringent properties. It soothes irritated mucus membranes aiding the eyes, ears, nose and throat. Taken at the first signs of respiratory problems, colds or flu, Goldenseal helps can help to prevent further symptoms from developing. It has also been used to help reduce fevers, and relive congestion and excess mucous.

Goldenseal cleanses and promotes healthy glandular functions by increasing bile flow and digestive enzymes, therefore regulating healthy liver and spleen functions. It can relieve constipation and may also be used to treat infections of the bladder and intestines as well.

Goldenseal contains calcium, iron, manganese, vitamin A, vitamin C, vitamin E, B-complex, and other nutrients and minerals. The roots and rhizomes of goldenseal contain many isoquinoline alkaloids, including hydrastine, berberine, canadine, canadaline, and l-hydrastine as well as traces of essential oil, fatty oil and resin. It is believed that the high content of these alkaloids gives its antibiotic, anti-infective and immune stimulating qualities.

In particular it is the alkaloid berberine that is most likely responsible for Goldenseal’s effectiveness against bacteria, protozoa, fungi, Streptococci and it also promotes easier removal of the bacteria by inhibiting their ability to adhere to tissue surfaces. Berberine is also anti-fungal and strongly anti-diarrheal. It aids against the infection of mucous membranes such as the lining of the oral cavity, throat, sinus, bronchi, genito-urinary tract and gastrointestinal tract. Clinical studies have shown it is effective in the treatment of diarrhea cause by E. coli (traveller’s diarrhea), Shigella dysenteriae (shigellosis), salmonella paratyphi (food poisoning), giardia lamblia (giardiasis), and vibrio cholerae (cholera).

It has proven its value in cases of diarrhea and hemorrhoids. Its astringent properties have also been employed in cases of excessive menstruation and internal bleeding. Externally, a wash can be prepared to treat skin conditions such as eczema and ringworm, as well as wounds and badly healing sores, or used as drops in cases of earache and conjunctivitis. The decoction is also said to be effective as a douche to treat trichomonas and thrush. As a gargle it can be employed in cases of gum infections and sore throats. The application of a paste or poultice containing goldenseal root is sometimes recommended for boils, abscesses and carbuncles on the grounds that Goldenseal helps to kill bacteria and reduce inflammation.

How Goldenseal Is Used

What the Science Says about Goldenseal

Side Effects and Cautions of Goldenseal