From the roots to the leaves, the coconut tree keeps on giving. Nothing is wasted.

The coconut sap is used to produce coconut wine, coconut vinegar and coconut gel. The sap of the coconut is gathered from the unopened coconut bud. The coconut bud is cylindrical in shape that tapers at the top and bottom (like a torpedo). The tip of the bud is cut with a sharp blade before it opens to flower. The coconut bud is then secured with strings around it from the top to bottom so that it may not open and flower. A container is then positioned to receive the dripping coconut sap from the cut bud. The sap is collected daily and the bud is cut again or “bled”. The cut is usually about an eighth of an inch per day. A mature coconut tree can yield up to a gallon of sap daily. Some people like to drink the coconut sap fresh from the coconut tree. Others prefer to drink it after it ferments for a few hours thereby raising the alcoholic content of the sap. When this coconut sap is distilled it can produce about 96 proof coconut liquor.

If the coconut sap (tuba) is not consumed and left to ferment, it turns to vinegar. One of the best white vinegars available.

The coconut leaf is used for several things. firewood, broom, thatch roof, baskets, and other containers. It is even used as material for fencing. Dried coconut leaf stems are mostly used as firewood. 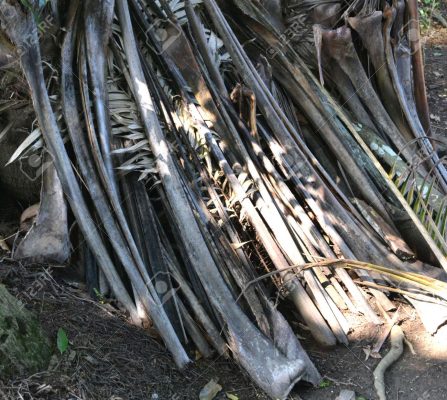 The most common product of the coconut meat is coconut oil. There are three ways of making coconut oil; one is RBD (Refined, Bleached & Deodorized), home cooking, cold pressed. The RBD oil is produced (by large factories) from copra (dried coconut meat). Making copra is accomplished by drying the meat either by sun or by fire. Home cooking is accomplished by grating the coconut meat, squeezing the juice out of it, then cooking the juice in a pan over an open fire. Cold pressed is where VCO (virgin coconut oil) comes from. This method can be home made or commercialized by big factories.

Cold pressed coconut meat from the mature coconut produces VCO. You can use a blender or a food processor to grind the coconut meat. Get a clean empty glass jar. Put a cloth filter at the mouth of the jar. Squeeze the shredded coconut meat and let the coconut juice (milk) flow into the jar through the filter. This coconut milk is approximately 40% oil.

Let it sit for about 24 hours and the VCO will separate from the water. After it sits for 24 hours the coconut cream will divide into three parts.

Coconut water is claimed to be medicinal. One thing for sure it is clear of any bacteria. It can be used as the sterile water for most powdered medicine for injection. Coconut water is also full of electrolytes. When dehydrated, coconut water does not just hydrate the body it also provides the much needed electrolytes. It is the best energy drink and it is natural.

Coconut water when mixed with hot water is supposed to turn the regular water alkaline and therefore a “cancer cell” killer. I have no scientific proof to this but there is absolute no side effects for this kind of use. Only good can come out of it.

Used for ornamental products and charcoal. Used as a piggybank.
Used as a bowl: When the coconut is split in half, with the “eyes” facing up or down, the other half without the “eyes” can be used a bowl. The bottom of this half shell is not flat so it leans to the side. In order to use the half coconut shell as a serving bowl a base must be made. The base is usually made out of any piece of wood (4″x4″x2″). The center of this base is carved out, so there is a hole in a form of a circle in this base. The coconut bowl is then placed in this hole of the base. It is a perfect fit. The hot soup in the bowl won’t spill as it passed around the table.

Excess coconut shells are the best source of charcoal.

Most coconuts are self-pollinating. The coconut tree continuously bears flowers.

The coconut flower starts off as a pod or bud shaped like a torpedo. When the coconut bud opens there are several pistils. The pistils are connected to the stem of the flower and they are staggered. The stem where the pistils come out can be 10 to 12 inches long. Each pistil that extends out from the stem is about 10 to 16 inches long. The coconut flower looks like an oak tree without leaves.

After the harvest, these coconut flowers are sometimes used as brooms or rakes.

The fiber between the outer shell and the skin of the husk is called the coir. Coir is twisted and prepared to be made into rope. The coconut coir is used for flower pots, filters, seat cushions, and other creative things.

As the coconut grows, the very tip or the shoot of the coconut is surrounded by this “blanket”. It looks like a woven thread, it is interlaced. As the leaves form and grow out, this blanket surrounds the trunk of the coconut tree. As the leaves grow old and fall out of the tree so does the “blanket”. The common folks use this “ginete” as a natural filter. In fact the “tuba” or coconut sap gatherers use this “blanket” as a filter to filter the “tuba” before they pour it into the final container.

Virgin Coconut oil the best antidote against obesity and diabetes

For several decades, man’s search for sensible weight loss program remained futile. People buy to the hype of fast, exercise-free diet pills, and often times end up either frustrated because of unfulfilled results, or worse with yo-yo effects.

Dr. Nestor Fuertes, a respected Australia-based Filipino doctor and Virgin Coconut oil advocate, said the most effective weight loss supplement had been right under our noses â€“ the VCO. “The difference with VCO (compared to other diet pills) is that you take it, it basically feeds your cell immediately. The fats are instantly converted into energy, so no fats deposited in your body.” He added.

Foods taken everyday, such as pork or hamburger, usually contain bad fats, which are deposited and accumulated in the body – usually in the mid-torso section, or locally known as “bilbil.”

VCO’s medium chain triglyceride is the good kind of fat, set highly apart from all the other fats found in our everyday food. “Once we actually swallow the VCO, it immediately goes to the liver and it will be redistributed immediately into the cell. It repels attraction with fatsâ€¦after it is absorbed by the cell, it is immediately converted to energy.” He explained.

He added that VCO has a thermogenic effects on the body, that slowly, but effectively increases the body’s metabolic rate making it easier for the body to burn fats and perform better. VCO is famous for the plethora of health benefits it offers. Over the years, it gained popularity and has been ubiquitous in the local grocery aisles. It is only recently that health practitioners advocate on its potential slimming effects. Typically, an individual taking VCO regularly may lose 4 to 6 pounds in just a month.

He cited a study in a prestigious university in Australia which notes overweight men who took high doses of VCO have lost a significant 3-4 kilograms in just four months. But Fuertes said such pace is not usually recommended, because high doses of VCO causes loose motion syndrome and 4-6 pounds weight loss is too drastic for the body system.

Fuertes recommends taking 1 to 2 tablespoons of VCO at least half an hour before meals. Anyone who’ve just been introduced to VCO may start with a lower dosage of ½ teaspoon. A person needs to take the required dose twice a day to achieve the desired results, he said. Though it has no claims of any therapeutic effects, VCO’s potential to cleanse clogged arteries out of the bad fats had been proven effective not only here. His patients abroad have testimonies about the effects of VCO in their health and wellness.

“VCO may actually push you right back into being normal and healthy,” he added. He cited too much fat deposit in the body retards its functions and is oftenly manifested in the fastest growing lifestyle diseases nowadays known as obesity.

The 2006 world health organization figures said that 3.3 million Filipino female’s aged between 20 to 25 are over-weight. Half of them are obese. About 1.2 million Filipino males on the other hand are overweight and half of them are obese. What makes the figures alarming is it occurs to population who are at their productive stage, peaking at the age 35 and half of these obese population are likely to be diabetic, hypertensive and are at risk of heart attack.

“Why do we need to get into this stage before we do something?” he said. “Taking 2 tablespoon of VCO twice a day coupled with a sensible diet and exercise may stop you from progressing from being obese to hypertensive, diabetic, etc,.” he advised.

Dr. Conrado Dayrit, eminent Cardiologist, Professor Emeritus at the University of the Philippines, and then President of the Philippine Heart Association, published a book entitled “The Truth About Coconut Oil, The Drugstore in a Bottle”. Dr. Dayrit published..
“Virgin Coconut Oil (VCO) prevents HEART DISEASE. Coconut oil, like other vegetable oils, has no cholesterol. In fact, VCO intake in substantial amounts keeps cholesterol low, between 170 and 200 milligrams per deciliter, by promoting the conversion of cholesterol into pregnenolone to be utilized in the production of adrenal and sex hormones. VCO’s cholesterol-lowering effect is a regulatory action since it can also beneficially raise cholesterol when it is too low for the body’s needs, thus maintaining the healthy ratio between low density lipoprotein-cholesterol and high density lipoprotein-cholesterol (HDL-C).

On the other hand, the lowering of total cholesterol by the omega-6 oils (corn and soybean oils) is not beneficial since it also lowers the good HDL-C, subsequently depositing the lost oxidized cholesterol in the arterial plaque, which could clog the arteries. While statins block cholesterol synthesis, this does not address the inflammatory nature of atherosclerosis. VCO does, having the ability to kill major types of atherogenic bacteria and viruses in the blood while exhibiting anti-inflammatory action in synergy with omega-3 fatty acids.”